You’ve probably heard it at least once in your life – “Spay and neuter saves lives!” But what exactly does that mean?

The numbers speak for themselves 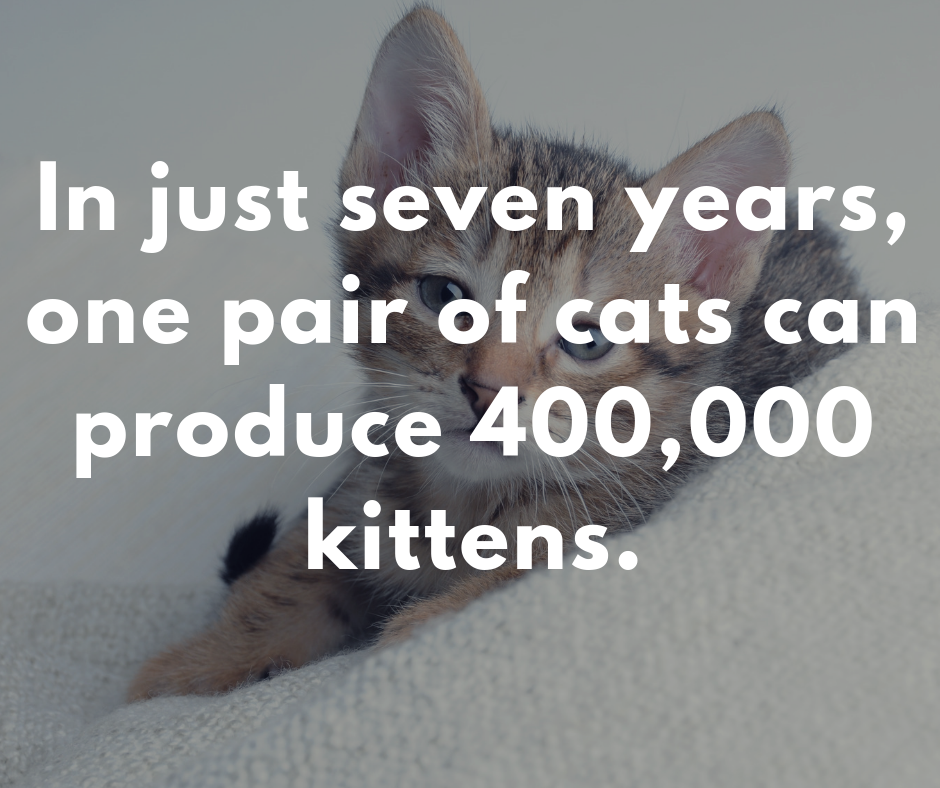 There’s no doubt about it – cats are really good at making more cats. In fact, it has been estimated that one pair of cats can produce up to 400,000 kittens in just seven years! The Humane Society of the United States says that there are over 90 million pet cats, and another 30-40 million community cats (feral or free-roaming, unowned cats) in the United States. If you think about all of those cats making even more cats each year…well, the numbers add up quickly in an endless cycle! There certainly aren’t enough homes for all of those cats, which means they end up in shelters. On average, the cost of sheltering a cat at a municipal shelter is $250 – and this cost is often at the expense of taxpayers.

There is no “magical cat land”. 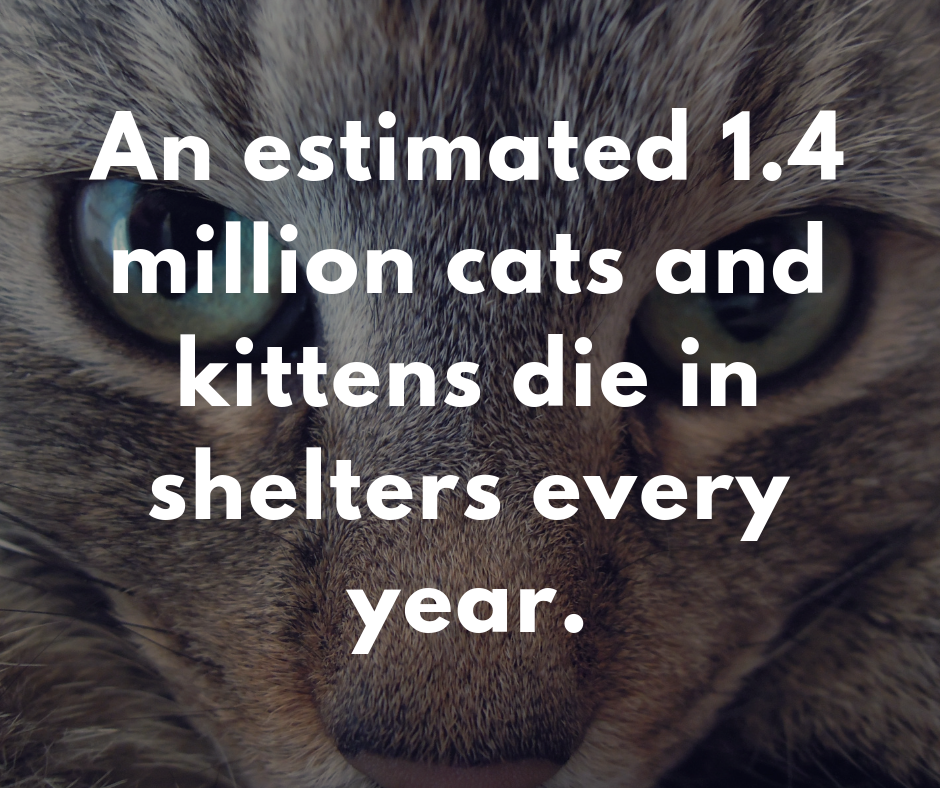 Municipal shelters all over the country are full of great people, with big hearts. The employees and volunteers work hard everyday to save lives. But, shelters don’t have infinite space or resources. Most municipal shelters are open intake facilities, meaning they do not turn away animals, even when they do not have room. There simply are too many cats, and not anywhere for them to go. As much as we wish it were true – there is no magical place for all of the unwanted cats to go. And so, millions of cats face euthanasia at municipal shelters every year.

Everyone deserves a full, happy life. 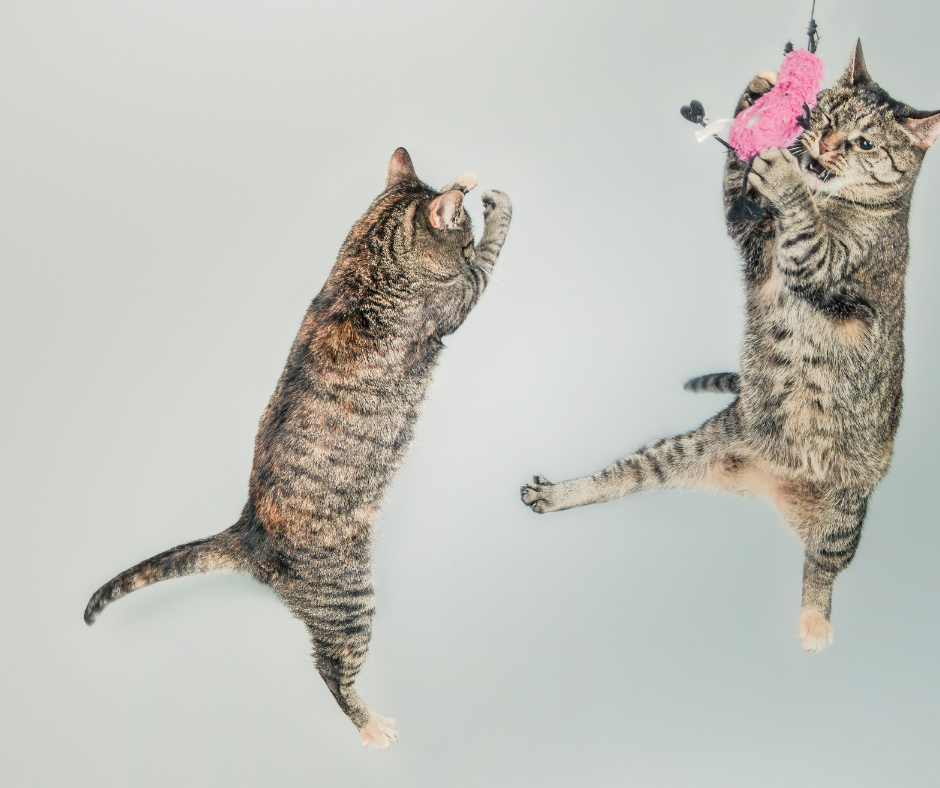 Cats that have been spayed or neutered live longer, happier lives. This simple, routine procedure offers many benefits other than population control. Spaying and neutering eliminates the risk of some cancers in both male and female cats. Cats are less likely to feel the desire to roam – as they no longer need to look for mates. This is especially beneficial to male cats, who can travel several miles just to find a female cat. Roaming less decreases a cat’s chances of being hit by a car and receiving injuries from unknown predators like dogs who may live in areas that a cat is unfamiliar with. Neutering also decreases a male cat’s desire to fight and to spray.

For female cats, having multiple litters of kittens is taxing on their bodies, especially for feral or free roaming cats who may not have the same access to resources as indoor cats. Male and female cats alike are much happier all around when they no longer have the stressors of mating to worry about!

Spay and neuter provides many benefits to cats and to the people who love them. And on a larger scale, spaying and neutering just one cat will prevent thousands of unwanted animals from facing euthanasia in shelters.

Kitty City, Inc., recognizes the importance of spay and neuter, not only in improving the lives of individual cats, but as a key part of addressing the big picture of feline overpopulation and the burden it poses on local communities, taxpayers, and animal shelters. We believe in a future where no healthy cat is euthanized for space or time in shelters, and we know that spaying and neutering is critical to reaching that future.

Kitty City Inc., works hard to improve the lives of cats every day…and you can, too! Together, we can build a better community…one cat at a time.

Our Community Impact - Your Donations Are Spent Directly on Helping Pets in Our Community!

Our homeless pet avoidance is based on calculate-this.com estimates for a 10 year period and the actual number of spays that we have provided to cats in our community.

Taxpayer savings estimates are based on intake diversion for a percentage of the population we have prevented.

Ongoing support is important to enabling projects to continue their work, so we encourage donors to continue to contribute to projects over time. But if you must cancel your recurring donation, please notify us.